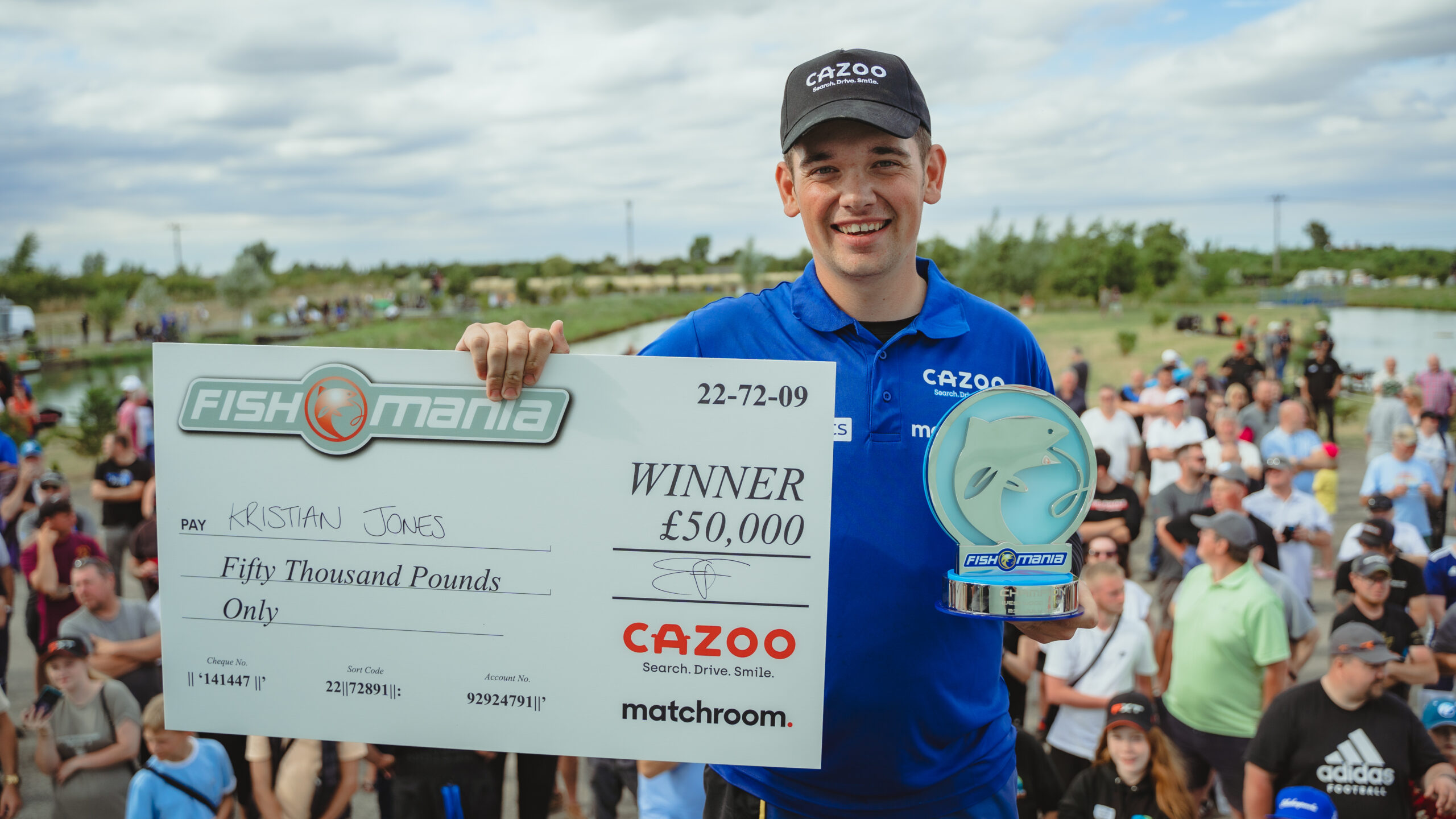 Kristian Jones has won Cazoo FishOMania 2022 by the finest of margins as he claimed the £50,000 title with 56.750KG the Grand Final at Westwood Lakes in Boston, Lincolnshire thanks to a mammoth 10kg+ final weigh in to pip his rivals.

Jones struggled with the consistency of Art Hilmi, Andy Power and Andy Dyson early on with the three shallow fishing for F1s to make it work and look to take it away from Jones. Dyson had his moments where he looked to threaten and a key 7.6kg in the final weigh in meant he took second place for £10,000. Hilmi took his section prize of £2,000 whilst Paul Wright took his and Power took the others.

“My bank runner kept telling me I was too far behind. Fish for second. I wasn’t thinking about it. When they said I had beat Art, I couldn’t believe it. When It started going down the edge with bigger fish. I started to catch some proper carp. I knew if they kept coming I could catch up with Art catching F1s.  I didn’t think I’d catch up. I was amazed when I found out.”

“What I thought was, when I had the lull keep feeding the edge. I started to start seeing some fish come back in. The first fish in the sixth was a 6lb carp. It was different. I expected shallow fishing to play a part for me but I binned it off and I concentrated on my edge and it came good.”

“I know the lake. We fish it well. It gave us some advantage. I did fancy it. You don’t believe it’s going to happen until it happens. I still didn’t believe it when they told me at the end.”

The 23-year old was much talked about heading into the contest as one of the younger anglers in the grand final and he struggled early on as he went for F1s. Jones admitted the change in strategy to focussing on his edge was the difference in the end as he claimed the prize money which he says will go towards a new fishing van.

Jones went on a run from the sixth weigh in to draw the gap close before sealing the deal in monumental style. 8.5kg got him going in the sixth; 6.4kg in the seventh; 5.3kg in the eighth; 8.50kg in the ninth and the final 10.325kg put the trophy and cheque in his arms.

Power and Hilmi were setting the early running. Early on, Power took the lead from Hilmi on several occasions by tiny margins. Jones meanwhile had the tougher start to to be out the picture early doors. Hilmi looked to have taken victory with just 5kg separating him and Dyson going into the final weigh-in before Jones knocked the pair out the park. Hilmi made only 3.225kg in the final weigh in and that was his race run.

Andy Bennett came into the day as the much favoured bookies favourite with odds of 9/4. The two-time winner qualified off a similar area of the lake to what he was on today but it wasn’t to be as he finished 18th with 32.525kg.

Cazoo FishOMania 2022 – Everything you need to know