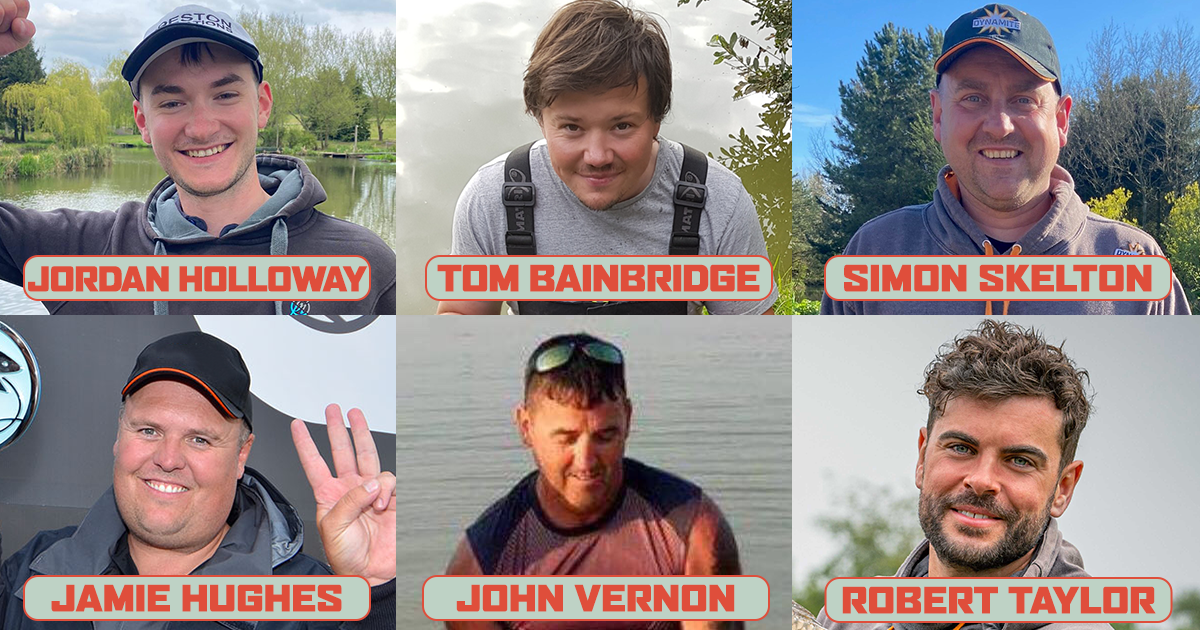 Ahead of this Saturday’s Fish‘O’Mania at Hayfield Lakes in Doncaster we profile the 24 anglers taking part, continuing with the next six to qualify for this year’s Grand Final.

Jordan Holloway
Qualified from: Tunnel Barn Farm
Previous FishOMania Finals: 2019 (4th)
At the age of 22 this is already Jordan’s second FishO final; he came fourth two years ago and is hoping to go even higher up the leaderboard this time. The sales director from Bewdley spent four years in the England Under-20s team and said he was lost for what to do when angling wasn’t allowed during the lockdowns.

Tom Bainbridge
Qualified from: The Oaks
Previous FishOMania Finals: Debut
Tom, a joiner from York, counts qualifying for this year’s final as his greatest angling achievement. Last year he bagged a personal-record 399lb 14oz bag at the Skyehouse Open match. The father of one says Andy Bennett is one of his favourite anglers but he doesn’t like fishing in winter.

Simon Skelton
Qualified from: Lake View Fishery
Previous FishOMania Finals: 2019, Runner-up
Second two years ago, Simon Skelton is hoping this will be the year he takes the £50,000 first prize at FishOMania. The Melton Mowbray man is director of his own plumbing company and has been angling for 20 years. He once caught a 200lb aripama in Thailand and is a Leicester City season ticket holder.

Jamie Hughes
Qualified from: Weston Pools
Previous FishOMania Finals: 11 finals, three-time winner (2013, 2015, 2017)
Think FishOMania, you think Jamie Hughes. This year he is angling in an unprecedented 10th consecutive finals, a record he just seems to keep adding to. The three-time champion from the Wirral spent much of the pandemic filming for the Winning Ways YouTube channel with Andy May.

John Vernon
Qualified From: Heronbrook Fisheries
Previous FishOMania Finals: Debut
Vernon, a tackle shop owner from Manchester, makes his FishO debut this year. He enjoys darts and says his favourite angler is FishO legend and fellow competitor Jamie Hughes. ‘JV’ has been angling for 20 years and enjoys the banter that comes with it, but not the packing up after a match.

Robert Taylor
Qualified from: Makins Fishery
Previous FishOMania Finals: Debut
Graphic designer ‘Bobby’ is another FishO first-timer at Hayfield this weekend. The 34 year old won through at Makins Fishery and enjoys the competitive side of fishing. He describes himself as chilled out and says he watched a whole lot of Netflix during the lockdowns.

FishOMania 2021 – Everything You Need To Know